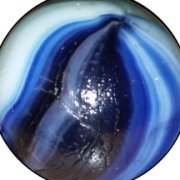 An Akro-Heads garden--I found a swirl and a corkscrew today.

Happy Akro Friday for sure! Couldn't resist with a few sparklers!

I like 'em all, but it's hard to beat a good corkscrew.  Dug a few pics out of the archives. Thanks Bruce